Finland took part in the international Trident Juncture 18 exercise hosted by Norway in October and November. The two-week NATO exercise saw troops operating in Norway as well as in Finland and Sweden.

The exercise was mainly held in Norway but exercise units also operated in the North Atlantic and the Baltic Sea, as well as in Finland, Sweden and Iceland. A total of 29 NATO members and partner countries Finland and Sweden participated in the largest phase of the exercise, the LIVEX, between 25 October and 7 November 2018.

The Finnish-led naval exercise Northern Coasts (NOCO) 18, was also held at the same time as Exercise Trident Juncture. The number of participants in both exercises from Finland was 2,400 military personnel.

Finland participated in the exercise from its own national point of departure, to develop its own defence. During the exercise units from the Army, Navy and Air Force were trained in executing the tasks of the Finnish Defence Forces in demanding multinational conditions as a part of a lager exercise framework. The exercise did also develop the defence of Finland, international cooperation capability and the ability to provide and receive international assistance.

Training with the most important partners, Sweden and NATO, will also develop the abilities needed in international cooperation. It also improves Finnish capabilities and readiness to participate in crisis management and rapid deployment forces’ operations.

Finnish Forces and Equipment in the Exercise

Finnish Army units participating in the exercise included an infantry company from the Pori Brigade. The company trained as a part of a Swedish brigade. The main equipment of the Finnish contingent were XA-203 armoured personnel carriers.

The Navy's contingent in the exercise was an 80 persons strong Amphibious Task Unit in Rindal, Norway, and 1,800 participants in NOCO in the Archipelago Sea, the Bothnian Sea, the northern Baltic Sea and the Gulf of Finland.

The Air Force sent 160 participants to the exercise. The Finnish Air Force were operating with 9 F/A-18 Hornet multirole fighters in the exercise The Air Force operated from bases located in Rovaniemi and Ørland in Norway.

The Exercise in Numbers

Follow the exercise on this page and on social media

We collected all Trident Juncture 2018 related articles and press releases to this page. You can follow the exercise on social media with #tridentjuncture. 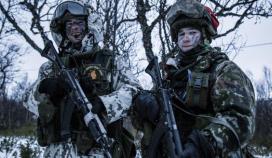 Undertaking training in the Finnish Rapid Deployment Force, the jaeger company demonstrates versatile capability to conduct versatile missions also independently. Yet, while winter conditions prevail, sustaining combat capability presupposes that both each individual soldier and the unit as a whole remain equally committed.
4.11.2018 | 10.17 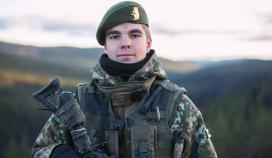 ”Interoperability is generated in these types of training exercises”

In the exercise Trident Juncture 18, the Finnish Army will be conducting training with the objective of enhancing international interoperability. This sequenced training that alternates between the areas of Finland, Sweden and Norway will improve our capability in providing and receiving military assistance if it becomes necessary and requested.
30.10.2018 | 9.19 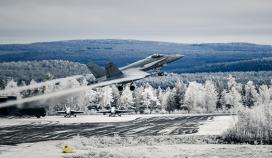 International exercises are an important part of the Defence Forces' activities. In Trident Juncture 18 we get to test our capabilities in a variety of ways in different, demanding conditions.
27.10.2018 | 14.01 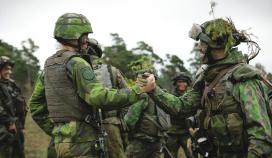 The Finnish Army will partake in the exercise Trident Juncture 18 in Norway and Sweden at the turn of October and November. The training objective entails enhancing international interoperability and capability for national defence of the Finnish Army.
10.10.2018 | 13.50
7.11.2018