The Finnish Defence Forces will celebrate the 105th Independence Day of Finland by a national parade on 6 December in Hamina. The theme of the parade is Security will be done together. The review of troops will be arranged on Hamina sports field and the pass in review on Kadettikoulunkatu. The Finnish Defence Forces’ and other agencies’ equipment will be on display for familiarisation at the square of the Finnish Flag. The events will be free of charge.

The parade will be participated by troops from the Army, Navy, Air Force, and National Defence University, as well as from the Finnish Border Guard and veterans’ and national defence organisations altogether up to c. 1,200 personnel. The event will include equipment of the Police, Rescue Department and Customs.

The review of troops will be reviewed and the pass in review received by the Finnish Defence Forces’ Deputy Chief of Staff Armaments and Logistics, Lieutenant General Timo Kakkola accompanied in the pass in review by Hamina Town Council Chair Ms Titta Erkkilä. The parades’ guests of honour will be veterans and lottas of our wars. The parade troops will be commanded by the Finnish Army Chief of Operations, Brigadier General Tero Ylitalo.  The field devotional will be held in the review of troops by the Finnish Defence Forces’ Logistic Command’s Senior Chaplain Kari Mannermaa. The parade arrangements will remain the responsibility of the Army Academy, and the music of the Dragoon Band. The parade will be presented to the public by journalist, Captain in the reserve Riku Rantala.

The Independence Day festivities will start by a flag raising ceremony by the Reserve Officer School Main Building (Kadettikoulunkatu 6) at 8. Simultaneously, the Swallow-Tailed State Flag will be hoisted to the extra-tall flagpole in Hamina at the Square of the Finnish Flag.

In conjunction with the flag raising ceremony by the Main Building, the Reserve Officer Club of Hamina will lay a wreath at the statue Commemorating Fallen Officers.

The Colour Guard will be formed by officer students and officer candidates of the Headquarters and Signals Company of the Reserve Officer Course 261.

Music will be performed by the Dragoon Band and Choir of the Reserve Officer School Student Committee.

The Lutheran service on the Independence Day will be ministered at Maria church from 10 onwards.

The guests of honour at the Lutheran service will be the veterans and lottas of our wars.

The equipment and activity field will be available for visitors at the Square of the Finnish Flag on Independence Day at 09-16.

The Soldiers’ Home canteen will have their service points available in the area as well.

The equipment display will include:

For familiarisation in more detail, please see the equipment catalogue at: https://puolustusvoimat.fi/en/equipment

The public will be welcome to follow the review of troops on Hamina sports field from the directions of Rauhankatu, Roopertinkatu, Villenkatu and Urheilijankatu and asked to arrive by foot well on time.

Order of review of troops:

The pass in review will be received by the Finnish Defence Forces Deputy Chief of Staff Armaments and Logistics, Lieutenant General Timo Kakkola accompanied by Hamina Town Council Chair Ms Titta Erkkilä. The parade troops will be commanded by the Finnish Army Chief of Operations, Brigadier General Tero Ylitalo.

The fly-pasts of the pass in review will feature Finnish Army NH90 transport helicopters and Hughes MD500 light helicopters as well as Air Force F/A-18 Hornet multirole fighters and Hawk jet trainers. The fly-pasts will cause noise over the area of Hamina.
The optimal locations for following the pass in review will be along Kadettikoulunkatu and Maariankatu.

The music performed in the event will remain the responsibility of the Dragoon Band.

ORDER OF PASS IN REVIEW

The order of the dismounted detachments in the parade: 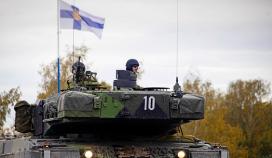 National parade on the Independence Day will affect traffic in Hamina on 4.–6.12.

The national parade on the Independence Day will contribute to changes affecting traffic and parking in Hamina on 6 December 2022. To avoid traffic congestion, the public is asked to move on foot in the downtown area for the duration of the parade events.
21.11.2022 | 14.30