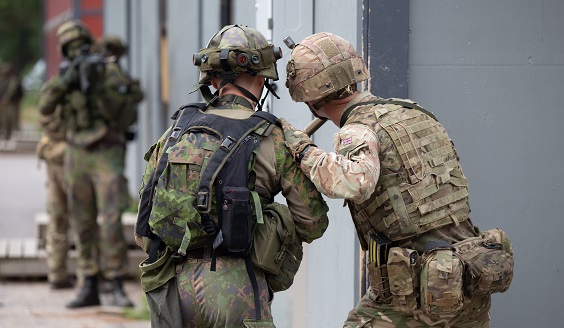 As a multinational country group, the JEF offers flexible and versatile support to NATO, EU and UN activities. Decisions on the participation, used forces and capabilities are done as national political decisions, and the activities can be stood-up rapidly. These activities do not require consensus among all of the JEF countries but the countries can choose whether to participate or not, based on political decisions.

Finland has not assigned specific forces to be used in the JEF context. Countries participating in the JEF are well-known partners from previous international crisis management operations and international exercises. The focus of the JEF’s activities is in the Baltic Sea, the Northern Atlantic and in the High North.

Preventing hybrid threats and broad-spectrum influencing has been an important part of Finland’s JEF cooperation since the beginning. The JEF also provides a good framework for long-term development that is based on the long and versatile experiences of the participating countries in the field of defence cooperation. The JEF framework also cooperates with the European Centre of Excellence for Countering Hybrid Threats, Hybrid CoE.

The Finnish Defence Forces has already participated in JEF exercises for a number of years, but after the Russian invasion of Ukraine, cooperation with our JEF partners has become even more active.  During the spring and early summer, we have trained together on land, at sea and in the air, both in Finland and in the neighbouring area. In addition to naval and Air Force exercises, we have tested and integrated JEF cooperation with our partners into the Army framework as well, for example in Exercise Arrow 22.

Command of Combined JEF operations was rehearsed in Sweden in the autumn of 2021, with the Finnish Defence Forces participating in Exercise Joint Protector, led by the United Kingdom and hosted by Sweden in Älvdalen. In May 2022, the JEF headquarters, the Standing Joint Force Headquarters (SJFHQ) dispersed its operations for a fixed time from London to Latvia and Lithuania. Finnish liaison officers also participated in this exercise.

The Joint Expeditionary Force is a multilateral defence cooperation framework led by the United Kingdom, consisting of ten countries: the Netherlands, Iceland, the United Kingdom, Latvia, Lithuania, Norway, Sweden, Finland, Denmark and Estonia. Finland joined the JEF in the summer of 2017, along with Sweden.