National Parade on the Flag Day of the Finnish Defence Forces

Themed Readiness at all times – Finnish Defence Forces as a safeguard for Finland, the parade will be participated by units from the Army, Navy, and Air Force, National Defence University, Finnish Border Guard, as well as representatives from national veterans’ and national defence associations. Altogether, the parade will be attended by up to more than 1,600 personnel, over 40 vehicles and 15 aircraft, as well as an inter-agency canine detachment.

The parade will be reviewed by President of the Republic of Finland Sauli Niinistö accompanied by Commander of the Finnish Defence Forces, General Timo Kivinen. The field devotional will be given by Field Bishop Pekka Särkiö, and the parade troops will be commanded by Commander of the Army, Lieutenant General Pasi Välimäki.

The parade may also be joined in and followed online on the Finnish Defence Forces’ social media channels:

Programme for the day

The celebrating of the Flag Day of the Finnish Defence Forces will begin by a flag raising ceremony at the Main Guard (Meritullintori 2) at 8.

The Finnish Flag will be raised by conscripts on guard duty at the Main Guard.

Commander of the Finnish Defence Forces, General Timo Kivinen and representatives of Finnish national defence organisations and trade unions will lay down wreaths at the Cross of the Heroes and at the grave of Marshall Mannerheim at Hietaniemi Cemetery.

Music will be performed by the Guards Band.

On the Flag Day of the Finnish Defence Forces, a Lutheran Service will be held at Helsinki Lutheran Diocese Church at 10.

The guests of honour attending the Lutheran Service will be veterans and lottas.

The equipment display on the Flag Day will be held at Kansalaistori Square at 10-19.

With opportunity for familarisation with the Finnish Defence Forces’ equipment featured in the pass in review, the equipment display will also include equipment by other agencies, the Police and Helsinki Rescue Department. The Uusimaa Regional Office will provide information relating to liability for military service.

In conjunction with the equipment display, the Soldiers’ Home Canteen will be selling refreshments at their salespoint.

Find out more about our equipment in the Finnish Defence Forces Materiel and Equipment Gallery.

The review of troops will be arranged at the Senate Square at 12. The troops will be aligning to position starting at 11:15. The public is recommended to arrive on site well on time.

The parade will be reviewed by President of the Republic of Finland Sauli Niinistö accompanied by Commander of the Finnish Defence Forces, General Timo Kivinen. The field devotional will be given by Field Bishop Pekka Särkiö, and the parade troops will be commanded by Commander of the Army, Lieutenant General Pasi Välimäki.

The parade will be moderated by presenter, YouTuber Jalmafi, Second Lieutenant (Res.) Jalmari Karvinen. Music will be performed by the Guards Band.

To avoid traffic congestion, it is recommended that the public move on foot or by public transport in the city centre during the parade events. The public will be welcome to follow the review of troops from the direction of Pohjois-Esplanadi and Aleksanterinkatu. Pedestrians are kindly asked to use footpaths.

Order of review of troops

The pass in review conducted on Mannerheimintie will start at 13:30.

After the review of troops, the dismounted marching detachments will move from the Senate Square to Unioninkatu to Aleksanterinkatu and to Mannerheimintie to the start point of the pass in review at the intersection of Simonkatu and Kaivokatu. Prior to the pass in review, the vehicles part of the review of troops will follow the dismounted marching detachments to Aleksanterinkatu.

The parade event will also include, for the first time, a new pre-series armoured 6x6 personnel carrier procured for the Army.

The flypasts of the pass-in-review will feature Finnish Army NH90 transport helicopters and Hughes MD500 light helicopters, as well as FAF F/A-18 Hornet multirole fighters and Hawk jet trainers, and the Finnish Border Guard Super Puma helicopter. The flypasts will cause noise over the area of Helsinki city centre.

The parade troops will be commanded by Commander of the Army, Lieutenant General Pasi Välimäki.

Music will be performed by the Guards Band.

ORDER OF PASS IN REVIEW

The order of the dismounted detachments part of the parade:

At South Harbour, Finnish Navy vessels as well as vessel and boat equipment by other agencies will be available for familiarisation. The Navy vessels on display will be Fast Attack Craft Hamina and Minelayer Porkkala. Equipment will also be on display by the Police, Finnish Border Guard, and Helsinki Rescue Department.

At Kansalaistori Square, the day will culminate in the Finnish Defence Forces’ summer tour concert featuring the Air Force Big Band with Heikki Silvennoinen as the soloist, and the Guard’s Combo with Souls of Women as the soloist. The trio by Emilia Vihanto, Iina Mutikainen and Klaara Koivunen will bring on stage a multi-faceted show ranging from the classics of soul to rock and pop music hits.

The night will end with the Conscript Band of the Finnish Defence Forces’ Showband. The 20-conscript-strong band’s skill is in rock classics and groovy funks, as well as in contemporary pop music and rap hits. 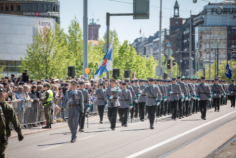 The national parade on the Flag Day of the Finnish Defence Forces to be held on 4 June 2022 will contribute to changes concerning traffic, parking and public transport in Helsinki. To avoid traffic congestion, the public is kindly asked to move on foot or by public transport in the city centre during the parade events.
25.5.2022 | 10.50 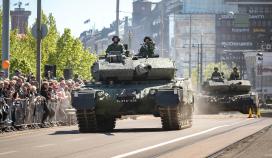