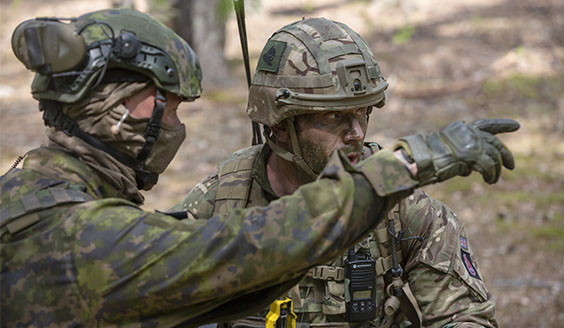 The Defence Forces has an active summer ahead of it as far as training activity is concerned, as exercises open up more widely than before to international participants. In terms of annual levels, international training and exercise activities will recover to the pre-Covid 19 level.

The Defence Forces’ this year’s international training and exercise plan was complemented in May by twenty new or modified exercises or exercise frameworks.

The summer training period has tended to be calm due to the changing of conscript contingencies.  The components added to the exercise plan make it possible to take the testing and enhancing of international interoperability for example in readiness units’ exercises into account more extensively than before.  Most of the complementary exercise activities will be conducted with Sweden, the United States and the United Kingdom.  These will be complemented by Germany, the training and exercises conducted by France, Norway, and in the framework of NATO and the JEF.

- International exercise cooperation has been intensified all through the beginning of the year.  New exercises have been opened up for partners, and planning progresses in all the Services.  The interest in training cooperation with the Defence Forces has shown that we already have good relations with our key partners, says Chief of Training, Colonel Kari Pietiläinen from the Defence Command.

Training activities across the Finnish territory

During the summer, the Army will organize several week-long exercise and training entities in Southern, South-Western and Northern Finland where the troops will conduct firing exercises and train together.  The objective of the exercises it to develop the interoperability and operating procedures of Army troops with international forces.

Since May, the Navy has organized several exercises with the objective of rehearsing, among other things, protection of maritime traffic, generation and sharing of situation picture, as well as coastal combat tasks and use of fire.  The training will continue actively throughout the summer.

The Air Force will organize several international training events in Finland in the summer which will contribute to the development of Finland’s national defence and demonstrate the partners’ support for our country.  One of the foci will be the JEF cooperation conducted with the United Kingdom’s Royal Air Force with the aim of developing the interoperability of the countries’ Air Forces.  The Air Force will also continue the Cross Border Training cooperation in the north and conduct combined training missions in the Baltic Sea region with the Swedish Air Force and the NATO flight detachments responsible for air surveillance over the Baltic countries.

The Defence Forces Logistics Command will be responsible for the host nation support involving the participation of foreign troops in Finnish territory.  Host nation support will include, among other things, determining the support needs of the invited troops, planning of transportation, receiving of troops and material, support while in the country, arrangements involving leaving the country and measures to be taken after the exercise.

The Defence Forces will provide more detailed information concerning the training and exercise events closer to the beginning or during the exercises.