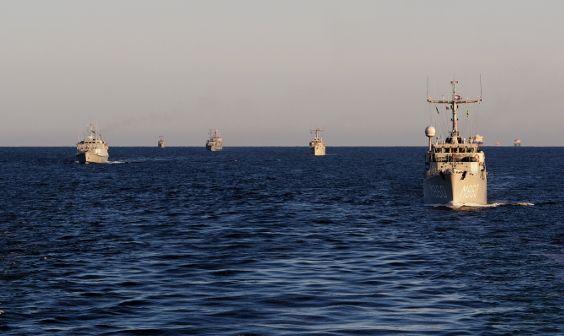 The year of the Navy’s Katanpää-class mine countermeasures vessels in the NATO Response Force’s Follow on Forces pool will come to an end on 31 December 2020. Nyland Brigade's coastal jaeger troops' period in the same pool will end at the same time.

For the Coastal Fleet’s 4th Mine Countermeasures Squadron, committing the Katanpää-class to NRF readiness was a project the squadron was determined to carry out with success.

- Preparations were carefully made.  That gave us a good starting point for raising the bar instead of just “maintaining” readiness.  Two main events were planned for the year with the objective of going for concrete practice, gaining experience of operating in the Standing NATO Maritime Group 1 and operating at sea for extended periods of time far from our own logistics system, says Juhani Lehtimäki, Commander of the 4th Mine Countermeasures Squadron.

These goals were met.  The duration and navigation range in MHC Vahterpää ’s  readiness training period represented a considerable effort in terms of navigation and logistics.

The corona pandemic caused a great deal of extra clarification work. The planned training periods could, however, be carried out with adjustments, scaled down in some respects.

The year was split into two between two Katanpää-class vessels: MHC Purunpää participated in NRF training for the first six months and MHC Vahterpää for the rest of the rotation.  The long joint training period with the Standing NATO Mine Counter-Measures Group One (SNMCMG1) planned to be the main event of the beginning of 2020  was scaled down considerably  due to the corona pandemic.   The part that got executed was mainly participation in the BALTOPS 20 exercise in June alongside the SNMCMG1.

The main event of the autumn was a six-week joint training period with the SNMCMG1. The period included, i.a, Sandy Coast 20, a new exercise for the Finnish Navy,  conducted off the Belgian coast.  This was the first time a Katanpää-class vessel has operated outside the Baltic Sea.

The exercises conducted during the year taught us a great deal and showed that the Katanpää-class vessels are high performance and hold their own in international comparison.  The lessons learned during the rotation  are being documented and will be introduced to practice.

- The competence gained during the 2020 rotation will be capitalized on for the next rotation in 2022, Commander Lehtimäki concludes.

- The personnel of both participating vessels saw to the preparations and execution independently.  Everybody’s contribution was needed and everything we had learned before was certainly put to a maximum use. I can’t be but happy and proud of being the Commander of the squadron when I’m around people with so much professional competence and the right attitude to do things, Lehtimäki points out.