The concept translates the political will into aims, directions and guidelines for the military level. The chiefs of defences also held a work meeting to discuss the progress made and the way forward.

The Finnish-Swedish defence cooperation is based on mutual trust. The objective of the cooperation is to boost the respective countries’ defence capabilities and conduct joint operations, ultimately increasing security and maintain stability in the Baltic Sea region and the High North. While execution of bilateral military operations is subject to separate national decisions, the core of cooperation is the ability to act and conduct operations together during peacetime, crises and war.

During 2019, the Finnish-Swedish defence cooperation has increased its pace setting strategic and operational steering directions, expanding the size and numbers of exchanges and exercises, such as the extensive Swedish exercise Northern Wind in March. The cooperation is also taking further steps in joint operational planning and combined training and exercises.

− “Sweden’s cooperation with Finland is essential. Our combined capabilities are warranties for a raised threshold in our joint area”, general Bydén said.

Video about the defence cooperation between Finland and Sweden 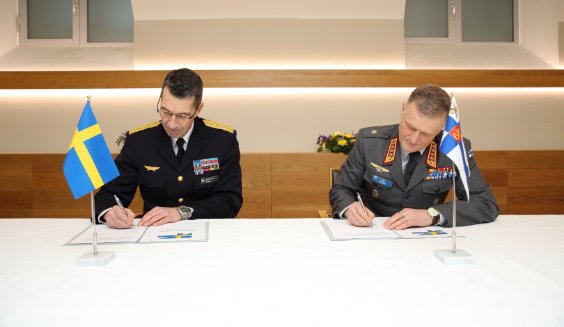