The purpose of the joint Finnish, Swedish, Norwegian and Danish Nordic Combat Uniform project (NCU) is to acquire a common combat uniform for the armed forces of the Nordic countries that will meet the requirements of the battlefield of the future. During the winter of 2019–2020 the project will enter a phase where data will be collected on the functionality of the uniforms of the four tenderers in field conditions. 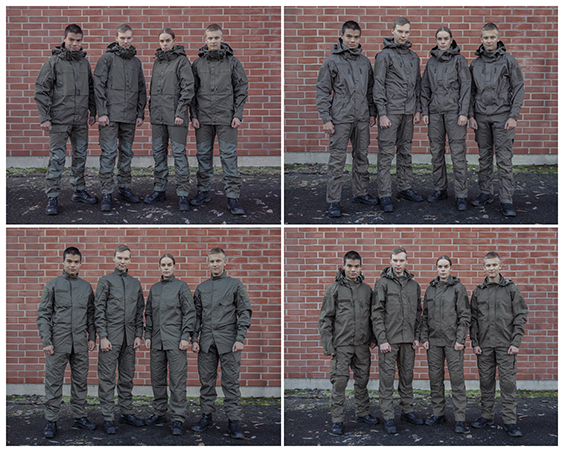 In December 2019 the Nordic Combat Uniform project (NCU) will enter field testing phase. During the this phase ending in May 2020, four combat uniform tenderers’ NCU systems will be tested by the armed forces of Finland, Denmark, Sweden and Norway. In the photo, the European area uniform configurations of the NCU systems are shown. During winter 2019-20 Finnish Defence Forces conscript test teams from Jaeger and Kainuu Brigades in Northern Finland will test the systems. All uniforms issued for testing bear a single green colour but in future service use the Finnish Defence Forces will use the standard M05 camouflage in NCU system. Photo: Joakim Serkelä / Finnish Defence Forces Logistics Command

The Nordic Combat Uniform Project, started in 2016, is a part of Nordic Defence Cooperation (NORDEFCO). The NCU clothing system includes uniform configurations from an underwear layer to outer garments, used in European, jungle and desert conditions.

The Nordic Combat Uniform configuration is the same in all countries, but each country will use its own national camouflage pattern in the uniforms. Headgear, gloves, footwear or personal protective equipment are not part of the NCU, but each participating country will procure those independently.

The decision on the supplier of the Nordic Combat Uniform is due in late 2020, and the first uniforms will be delivered to the participating countries in 2021.

The total value of the NCU Project during 2021–27 will be approximately 425€ Million at most, when taking into account the clothing procurement of all of the countries. The Finnish Defence Forces is committed to procuring the NCU clothing system with a seven-year up to 65 € Million framework agreement that is due to be signed in 2021.

The Finnish Defence Forces is developing and improving its’ soldiers firepower and survivability, mobility, situational awareness and maintaining combat readiness alongside the combat uniform project.  Improvements to firepower include the assault rifle (RK62M) modernization project over the last few years.  Survivability is improved, for example, by acquiring respirators and helmets, and by fielding the new, domestic, M17 body armour. The capabilities of reconnaissance troops and forward observers have been increased by purchasing new thermal imaging devices and target acquisition and observation systems.

Conscripts Will Test Uniform in Finland

The personnel participating in the field tests will be divided into four test groups, with the members receiving one of the NCU European configurations from the invited tenderers for testing.  After the field tests have ended, the Swedish Defence Research Agency (Totalförsvarets forskningsinstitut, FOI), will collect the feedback given by the Nordic user groups. The NCU project will analyse the feedback and use it to write a technical assessment on the combat uniform candidates.

The technical assessment and the tenders from the combat uniform tenderers are an entity that will provide the basis for the decision on the supplier of the Nordic Combat Uniform.