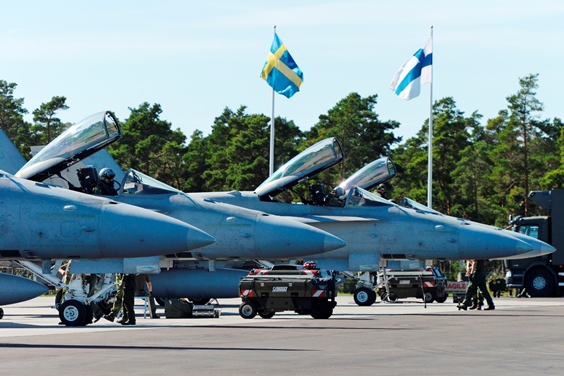 FVÖ 18, taking place over the Baltic Sea and Central and Southeast Sweden, is a regular event of the Swedish Air Force focusing on training air defense personnel in carrying out their tasks a of Sweden during a military crisis.
Finnish Defence Forces participate in FVÖ 18 with eight Air Force F/A-18s and two Army NH90 helicopters.

Four of the F/A-18s are based in Uppsala, Sweden where they operate as a part of the troops training in air defense tasks. Four of the aircraft operate from Turku, Finland emulating the adversary of the air defense troops .

Finnish and Swedish air force have participated each other’s’ air operations exercises since 2016. In September 2016, the Air Force’s Hornet detachment took part in the Flygvapenövning (FVÖ) 16 exercise of the Swedish Air Force emulating the adversary for the troops involved in the exercise. In the Ruska 2016 exercise in October, the Swedish Air Force in turn supported the training of Finnish troops with flights emulating the adversary with Gripen multi-role fighters operating from Kallax air base in Northern Sweden.

In 2017 the combined exercise activities have gained even more depth when the Air Force’s aircraft participated in the Swedish Armed Forces’ main tactical field exercise AURORA 17 as a part of the troops that train in air defence tasks. In turn, the Swedish Air Force visited the Finnish Air Force’s Ruska 2017 air exercise, playing a similar role.