Wreath Laying Ceremonies and Ceremonial Raising of the Flag 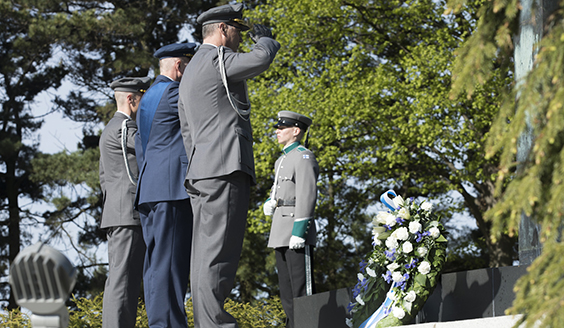 The day of the parade will begin with a Wreath Laying Ceremony at Törnävä Cemetery at 09:00.

The wreath of the Finnish Defence Forces will be laid down at the Memorial of Fallen War Heroes from the Winter War and Continuation War by Commander of the Pori Brigade, Brigadier General Rami Saari, and Chief of the Pohjanmaa (Ostrobothnia) Regional Office, Lieutenant Colonel Mika Piiroinen as well as Representative of Veterans Antti Västi.

At the Statue of Freedom Fighters, the wreath laying will be carried out as appointed by the Southern Ostrobothnia Chapter of the Heritage Society for Freedom War and Independence Association. At the Memorial of Those Who Died for Their Conviction, the wreaths will be laid down by representatives of civic organisations.

The Ceremonial Raising of the Flag will take place at Seinäjoki City Hall at 10:00 attended by Commander of the Finnish Army, Major General Petri Hulkko, and Chair of Seinäjoki City Board Pasi Kivisaari.

At the Statue of Marshal Mannerheim on Koulukatu, the Wreath Laying Ceremony will follow at 10:15. The wreaths will be laid by Commander of the Finnish Army, Major General Petri Hulkko, Chair of Seinäjoki City Board Pasi Kivisaari, and Bishop of the Diocese of Lapua Simo Peura.