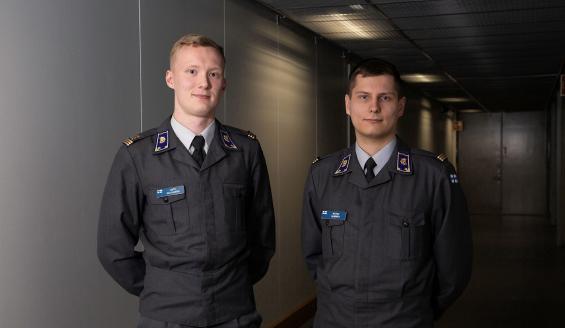 During the training period, the cadets will have a unique opportunity to have a close look at international training, as the Finnish Defence Forces will participate in the Locked Shields 2019 cyber defence exercise during week 15. The cadets will operate as part of the Finnish detachment in missions related to command, reporting and the generation of an operational picture.

The Locked Shields will provide Leinonen and Katajamäki with an excellent opportunity to train cyber defence skills together with leading professionals. It will be a demanding technical exercise where the international operating environment will challenge everyone to do their best. What other skills can Leinonen and Katajamäki provide for the detachment?

"One of us will help to generate an operational picture, while the other will offer support for the command. We will change roles as the drill proceeds so that we can obtain broader experience. We can act as a link between these two groups. While technical specialists will be staring at their screens, we can offer a broader view of the whole room. Our ability to collect intelligence and generate an operational picture will help technical specialists. What is more, we can bring the military jargon to the cyber environment", the cadets say.

According to Leinonen, both cadets have a high learning curve, even though they will not become technical specialists. "We are studying to become soldiers, not engineers." However, in the cyber environment, a soldier needs to think like an engineer, and an engineer like a soldier.

"The cyber environment can still be regarded as a relatively new operating environment, which is both global and vulnerable. The rapidly increasing digitalisation and dependencies on transboundary networks, combined with dependencies and vulnerabilities between systems, can expose vital societal functions and defence capabilities to cyber threats", says Lieutenant Colonel Harry Kantola, head of the Cyber Division of the Finnish Defence Forces C5 Agency.

"The Finnish Defence Forces need military and civilian personnel who have competence in various parts of the cyber environment, such as network structures, different operating systems, software and vulnerabilities. In addition, the personnel need to understand military practices and command structures", Kantola says.

Leinonen and Katajamäki know that the C5 Agency needs more than just technical competence, such as command skills.

"If you want to work as a commander, you also need to understand what happens at the grassroots level. During the training period, we have become familiar with the Cyber Division, including its many corridors, and also met its personnel. We started to feel like part of the team in just three weeks, and it would be great to work here. Simply put, this is the number one place in the Finnish Defence Forces if you have any interest in the area."