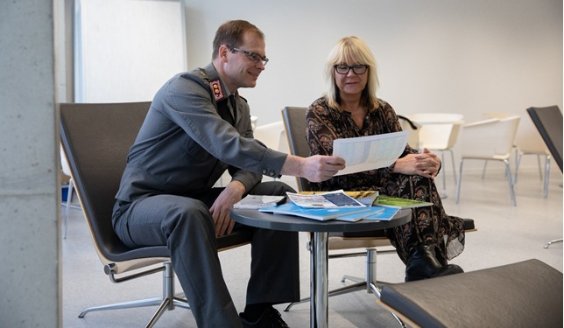 This course which focuses on the protection of civilians has been developed in cooperation with NATO, UN and neutral civilian organisations.

A pilot version of the course was organised in October 2018, and the Defence Forces International Centre will carry out the course 3-10 April 2019 certified by NATO. The objective of the NATO and UN Approaches to the Protection of Civilians (NATO-UN PoC) Course is to bring together representatives of interest groups participating in the protection of civilians and develop cooperation and mutual understanding between them. A wide range of organisations take part in this course. Students from 12 countries and teachers from 9 participate in the course. These include representatives, among others, from different sections of the UN and NATO, from non-governmental organisations, units of the defence forces and ministries of a number of nations, and from organisations focusing on the protection of civilians.

The protection of civilians aims at preventing and responding to the threat of violence faced by civilians. This involves a range of comprehensive activities involving in an essential manner both military and civilian elements and the police, not to mention neutral civilian organisations. The course launched in Santahamina at the beginning of April will clarify the roles and procedures of the UN, NATO and civilian organisations in the protection of civilians both on crisis management operations and in conflict zones.

The goal of the course is to teach the students how to identify groups that might cause violence or threats to the civilian population. The participants will learn how to respond to violence against civilians and thus prevent threats from emerging. The course will also focus on the threat of violence that might be caused by military organisations’ own operations, how to prevent and minimise it. The type of threats faced by civilians analysed in the training include, among others, sexual and gender violence related to conflicts. Political violence, crime and terrorism, childhood and youth are considered from the point of view of protection of civilians.

Head Instructor Virpi Levomaa and the Leader of the Course, Lieutenant Colonel Harri Westerlund who are responsible for the course arrangements say that all organisations operating in conflict zones, both military and civilian organisations, need each other to be able to provide maximum protection for civilians. Levomaa and Westerlund state that on the course, civilian organisations will be afforded an opportunity to deepen their understanding of soldiers’ actions in difficult circumstances, while soldiers are provided with tools for taking the protection of civilians better into consideration in cooperation with other actors. Through interaction, the course will provide an opportunity to unite different perspectives and interests bound to enhance procedures in the future, Westerlund and Levomaa elaborate. On this seven-day course, a great deal of active teaching methods will be used. The instruction will comprise, among other things, group assignments, panel discussions and interactive lectures.

The UN Peacekeeping Ministerial meeting held on Friday 29 March 2019 in New York is the world’s largest meeting on peacekeeping. Among other things, the goals of the meeting were to ensure that the member nations commit to the training and capability requirements set by the UN and to ensure the availability of high-quality and highly capable troops for UN peacekeeping operations. In addition, the meeting strived to secure political support and networks for reforms to be carried out in the UN. In the meeting, Finland placed a strong emphasis on supporting training involving peacekeeping. FINCENT’s NATO-UN PoC is a part of Finland’s contribution which emphases the importance of training in peacekeeping issues.

Representatives from the following organisations will attend the course: